Can Playing the Poker  Be Considered Gambling?

Home > Blog > Can Playing the Poker  Be Considered Gambling?

The debate as to whether poker is a game of luck or still has been going on for quite a while and shows no sign of ending anytime soon. According to most professional poker players, the game is purely skill-based, with luck playing an insignificant part. Others though do not agree with this assessment.

So, we will try to settle this conundrum and at the same time shed some light on the overarching principles of poker and whether it is really gambling or a skill-based game. 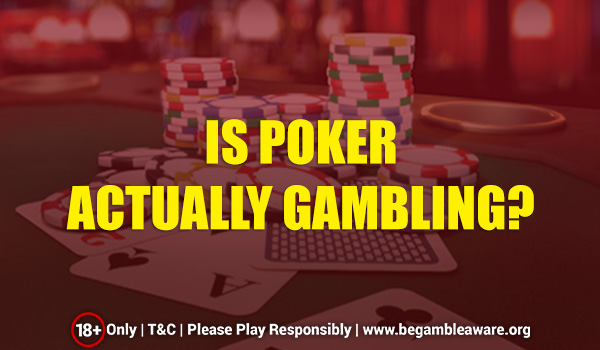 The debate as to whether poker is a game of luck or still has been going on for quite a while and shows no sign of ending anytime soon. According to most professional poker players, the game is purely skill-based, with luck playing an insignificant part. Others though do not agree with this assessment.

So, we will try to settle this conundrum and at the same time shed some light on the overarching principles of poker and whether it is really gambling or a skill-based game.

Most gamblers consider gambling to involve a trio of aspects. These are as follows:

Consideration- that is giving something in exchange for another thing. In poker games, this is the fee that players pay so as to be allowed to sit at the table and make bets.

Prize- refers to a reward.

Risk-aka chance – This is the possibility that something valuable will be lost, as the bet.

Risk is of particular importance in poker and gambling in general. Risk is also present at every stage of life, though the chances of this causing a life-changing event is considerably moderated if the individual is skilled and experienced and thus able to avoid the worst missiles that life can hurl in his/her way. This concept applies to gamble too, with skilled players standing higher chances of winning games.

Poker above all other forms of gambling is popularly deemed to be the most skill-based. Here are the reasons why this game cannot be considered to be mere gambling:

The decisions of players influence the outcome of each round.

Players play against each other, rather than the house or the dealer.

Bluffing is a skill that is required for success.

Poker players can make millions at poker games and tournaments.

Unlike games like slots and craps, player decisions in poker actually influence the course of the game. Player decisions begin right after the cards have been dealt and might involve a call, a raise, all-in or fold.

Playing With Other Players

Unlike other casino games, poker is a game in which individuals play against other individuals. During poker games, the house restricts itself to merely dealing the cards and does not actively participate in the game. It will however later receive a cut of the pot.

Thus, poker games have more than a passing resemblance to sports competitions, with the house essentially serving as a referee and ensuring that all players play according to laid down rules.

Bluffing is an important part of poker and involves deceiving other players as to one’s real intentions and capabilities. Bluffing can be regarded as an art form and has more than a little element of risk, but can significantly boost the chances of winning for those players who are very good at it.

Professional poker players who are really good at what they do stand to win millions of dollars yearly. One such player is Erik Seidel, who currently has a net worth that is north of $40 million, apart from having no less than 8 WSOP bracelets and a single World Poker Tour title to his name.

So, yes, poker pays! The above-mentioned player is merely one out of many others and is remarkable in that they make winning again and again rather easy.

Is Poker Actually A Game Of Luck?

Some would vigorously nod in agreement when asked the above question. The facts that seem to lend credence to their stand are that:

Both Small Blind and Big Blind hands bets are compelled

The above will be examined in turn.

The cards that poker players receive are randomly allocated to them by the dealer. This makes it, unlike a sports game where athletes can utilize their training and skills to come out on top. Poker players, on the other hand, have to pray that they get dealt a lucky hand. Or do they? Actually though, at the start of each round, all poker players are given a lot of options and can use this in association with their cognitive powers to alter the outcome of the round, or at least reduce their losses.

The initial bets are usually referred to as Small Blind and Big Blind and are normally performed even before the cards have been dealt. This ostensibly means that players are playing blindly. However, professional players are of the opinion that wins and losses in such initial bets are not that important, as any losses can be made good in the long run.

Some players who lose at poker games do all they can to blame their losses on the game itself, referring to it as a mere game of chance, rather than taking a closer look at their playing style or their meagre knowledge of the rules. However, as professional players have shown, it is possible to record consistent wins at poker, while scooping up some serious money. This cannot simply be attributed to mere luck, which means poker is not a game of luck.